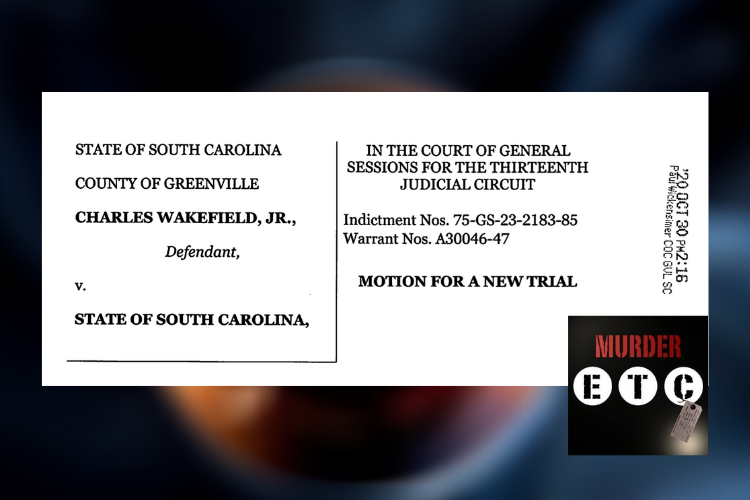 Attorneys for Charles Wakefield, Jr. filed a motion in Greenville County Court Friday saying Wakefield has discovered new evidence that casts doubt on his conviction in the 1975 murders of Frank and Rufus Looper.

In the motion, attorneys Josh Kendrick and Christine Mumma write, “During the podcast Murder, etc. (Brad) Willis became aware that then-chief of the Greenville Police Department, Ken Miller, had come into possession of new exculpatory evidence in Wakefield’s case, a file and a gun. That evidence serves as the central point of this motion. However, the motion will lay out new evidence that has accumulated over the decades.”

The file in question included the still-missing documents first found and then reportedly lost at the Greenville Police Department (for more, see our special report Gone).

An investigation by the South Carolina Law Enforcement Division (SLED) revealed that Greenville Police Officers discovered a file in 2018 that, according to multiple people who read the documents, included a letter or letters from the mistress of 1975 Sheriff Cash Williams. In the letters, the mistress reportedly accused Williams and men who worked for him of being behind the Looper murders.

At some point after the discovery, the file landed on the desk of Cold Case detective Rick Woodall. Woodall claimed in a SLED interview that he’d given the file to now-retired detective Melissa Lawson, but Lawson told a SLED agent she never had the file and Woodall must be “confused.”

The file has not reappeared.

Wakefield’s attorneys have also asked the courts to consider the .32 Rossi discovered by Murder, etc. in October of 2019 and first reported in October Surprise.

The gun, a .32 Rossi revolver, was the same make and model as one a 1975 SLED agent said was the most likely murder weapon in the Looper case. Murder, etc. first saw the gun in the hands of a man named Don McIntyre.

Days later, Greenville Police recovered the gun from McIntyre but did nothing with it until a judge ordered it tested earlier this year.

The Federal Bureau of Investigation tested the gun, but the results were inconclusive.

According to an FBI lab report obtained through a Freedom of Information Act request, that ruling, according to the FBI, meant the agency could not definitively match the gun to the bullets. However, the report said the FBI couldn’t say the revolver was not the weapon that fired the bullets.

In the motion, the attorneys said they filed today – at what is essentially the deadline to request a new trial – based on a South Carolina rule of criminal procedure that requires a defendant to file within one year of becoming aware of new evidence.

Wakefield first became aware of the gun after the Murder, etc. report.

Read the entire motion by clicking below.